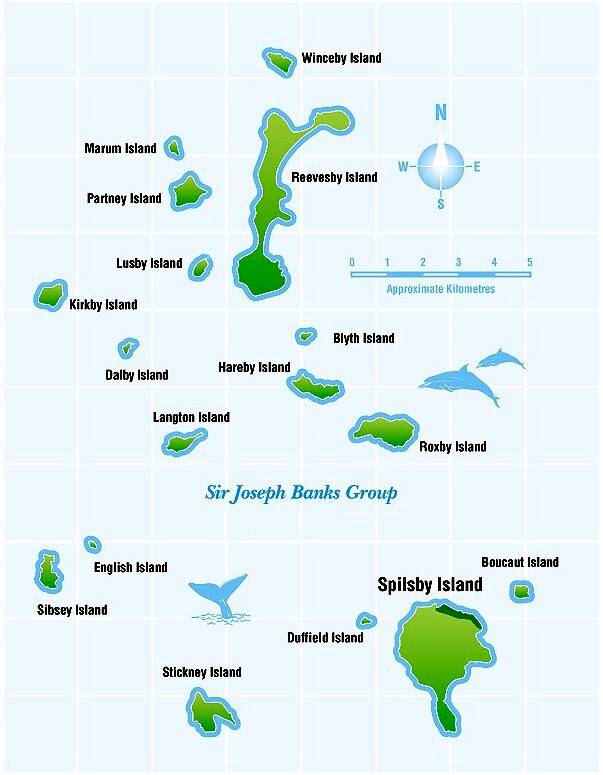 Note: approx. only. Do not use as an anchoring point on your GPS.

The Sir Joseph Banks group consists of about 20 islands, islets and rocks divided into two main parts. The northern part, with the exception of Dalby and Kirkby islets in the west, and Winceby Island in the north, all stand on a bank over which the depth is 9.1 metres or less.

The southern part of the group consists of the detached cluster of Sibsey and English Island to the west; 5nm E-SE of this, Stickney Island with its connected reef and islet; another 3nm E-NE of Stickney, the cluster of Duffield, Spilsby, Boucaut Islands and Seal Rock; and lastly Buffalo Reef, 6-7nm SE of Boucaut and the eastern-most outcropping of the Banks Group.

The islands are all low-lying, all with more or less limestone capping on granite platforms, the latter most often exposed along shorelines and in adjacent shallow or drying reefs.

Tide swings of up to 1.60 metres significantly affect navigability in the shallower areas and passages, especially in the northern part of the Group.

Maximum land heights above chart datum are 30 metres or less on all except the southern end of Reevesby (32m) and Spilsby (41m), and only on these islands is there any vegetation higher than low shrubland.

With the exception of Spilsby (which remains privately owned), the islands of the Banks group were incorporated into a proclaimed Conservation Park between 1967 and 1974. The islands are a major breeding area for Cape Barren geese, white-faced storm-petrels and for several other bird species.

“ANCHORS AWAY” “
Beachcomber” spent some wonderful time in the Revesby Island lagoon recently.
Being aware of the difficulty of anchoring – the floor is sand covered limestone – we were very careful to drop the Admiralty in a green, sandy spot. Did all the right things – reversed, let out more chain, reversed again, then set the anchor-drag alarm. It was blowing 20+ so watched and waited, no movement at all. We felt very safe and secure.
At 2230 (30 hours later) “Beachcomber” suddenly listed, the drag alarm blared, and we were off………..
The wind was up again, and maybe there had been a slight wind shift, but we were mystified why, after such a long time, we should suddenly be free. It certainly proves the point that anchoring can be a doubtful business, and deserves a heap of TLC.