In 1881 the Marine Board allocated to the South Australian Yacht Club a parcel of land and water on the Birkenhead side of the Port River, adjacent to where the Birkenhead Bridge was constructed many years later. Here the organisation prospered, although there was a lack of much in the way of social amenity.

In 1884 the Squadron purchased the freehold of the foreshore where the iron clubshed stood. Ramps and other works were undertaken over the next few years. The energetic and popular Honorary Secretary, Magnus Wald, instigated significant developments. In 1896 he produced a scheme to replace the indifferent structures at Birkenhead. As a result a roomy shed, containing lockers and other yachting conveniences, was provided. At least part of it survives at the time of writing this account.

One of the two RSAYS sheds at Birkenhead survived for more than a century. (JH Cowell)

At a Monthly Meeting held on 10 January 1901, Members unanimously agreed to a merger of RSAYS and the Semaphore Club, of which Magnus Wald was the principal founder. Premises were purchased on the corner of Dunn Street and the Esplanade for £725, which were extended at an estimated cost of £1,750.

Amidst great controversy and after court actions, the Semaphore premises were sold in 1927. This occurred in part because erection of a large pavilion building obstructed a proper view of the waters off Semaphore and Largs Bay, where many races were held. Because of changes to the Licensing Act, the licensed premises were confined to a single venue, which was in an old bank in Port Adelaide. As was to occur in 1968, a few devoted Members treasured their familiar club, but the Squadron could no longer afford to maintain facilities for shrinking numbers of active participants in the social life of the club in that location 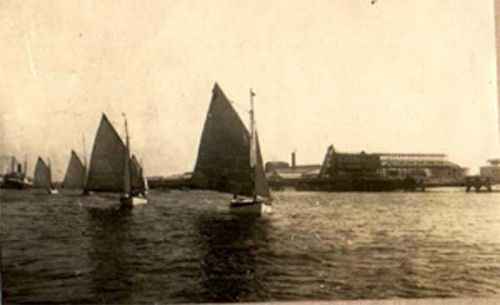 A typical Squadron race in the Port River in 1922, not long before the move to Outer Harbor. (Birnie album) 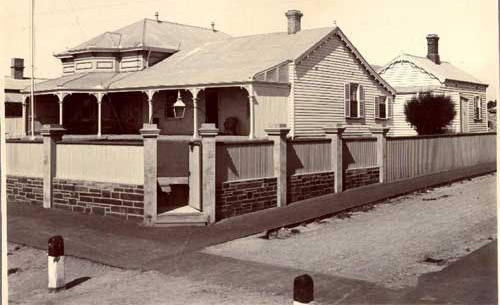 To revert to Birkenhead, the boatshed was extended by an additional 1,800 square feet, at a cost of £135. Members did much of the work in working bees, which have been a feature of Squadron developments ever since. One donated a new landing barge. The Squadron was thriving, having undertaken all this from its own resources, and by 1900 was free of debt.

The annual report for 1903 recorded the admission of 25 new members during the year, and vessels on the register now numbered 54. The mooring berth was deepened and enlarged by the Marine Board. A newspaper reported, “Their financial position has improved beyond their most sanguine expectations.”

Improvements that year (costing nearly £100) included strengthening the landing stage, installation of a telephone, building a spar shed and extra lockers etc at Birkenhead, plus decorating the billiard room at the relatively new Semaphore social clubhouse. The balance of assets over liabilities was now £2,046, an increase of £376.

The Marine Board granted definite tenure and extended the mooring berth in the Port River at a rent of £20 per annum for 10 years.

In 1905 the ramp was found to be rotten, due to Teredo navalis. It was replaced with a solid one of stone and cement. 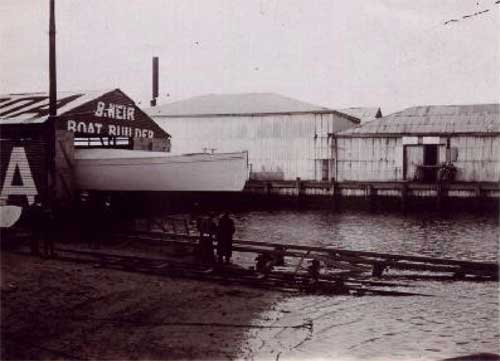 The hull of AG Rymill’s Avocet emerges from Ben Weir’s shed beside the two Squadron sheds, 1909. (Rymill Gifts)A typical Squadron race in the Port River in 1922, not long before the move to Outer Harbor. (Birnie album) 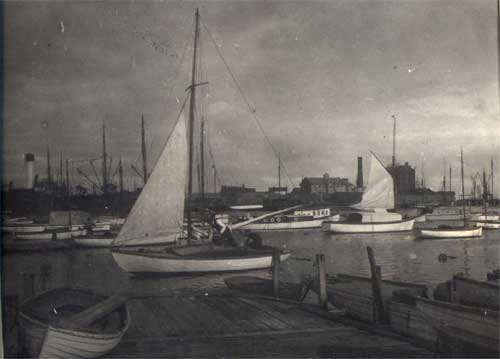 Quei drifts past the pontoon at Birkenhead (Birnie album)

With the introduction of six o’clock closing in 1916, the licence of the Semaphore Clubhouse was transferred to new premises at Port Adelaide, where the Squadron bought the Bank of Australasia building. Here many of the social activities were concentrated, leaving the Semaphore premises for use mainly on days when sailing races were conducted from the jetty there. Members who lived nearby also made use of them.

As early as 1912 the Marine Board declared its intention to order the removal of yachts to Outer Harbor. An undated newspaper cutting is headed, ‘Removal of Yacht Moorings’ —

The yacht moorings of the Royal South Australian Yacht Squadron are to be removed from their present site at the west end of Birkenhead to the foreshore near the Outer Harbor. This is the dictum of the President of the Marine Board, who stated at a meeting of the Board on Thursday that the contemplated alteration had the sanction of the members of the Squadron. The space now occupied by yachts is needed for vessels of the mercantile service, and Mr Searcy thinks yachtsmen will appreciate the change. At the new site which has been selected there is more room, and it will be advantageous on the score of cleanliness. The North Arm, said the President, would have been a splendid site, but it was too isolated, whereas the moorings near the Outer Harbor would be easily accessible by train. The change is not likely to take place for some time. It was only reported to the Board, remarked the President, because it was in the air.

In April 1917 the Birkenhead premises were compulsorily resumed by the Marine Board ‘for public use’, but for the time being there was no change. In 1920 a newspaper reported,

The committee [of the Squadron] were pleased to be able to report that a satisfactory arrangement had been made with the Marine Board for the deepening of that section between the Squadron’s shed and Jenkins’s Slip for the accommodation of yachts on the registers of the Squadron and the Port Adelaide Sailing Club. When these deepening operations were completed, the Board would grant to each club a lease of one moiety of the area.

In 1921 a septic tank was installed at Birkenhead at a cost of £63 and a tender was made for lease of Slip Number Four (Pickhaver) for seven years at £52 per annum (pa). A stove was bought for the “cottage” at Birkenhead. The Secretary of the SA Harbors Board made an offer of £2,550 compensation for resumption of property, which was accepted. A lease on the Birkenhead property was offered at a rental of £100 pa for 21 years, plus rates and taxes.

A “lean-to” was erected to protect motor cars and a balcony was planned, together with new lockers and some extension of the shed at a cost of £2,620. Originally this was to be financed by issuing debentures to Members, but in August 1922 it was decided to do so through an overdraft and by quitting the premises in the old Bank of Australasia building at Port Adelaide.

In June 1922 the Harbors Board offered to extend the lease at the McEndrick Street end of the property by 60 feet at an annual rental of £35 for 21 years. New moorings were laid in an extension of the previous water lease.

By 1923, however, it was clear the Squadron must move to Outer Harbor, and the Birkenhead premises were vacated by 31 July that year, six months ahead of the deadline. The background to this abrupt reversal has not been obtained. The government of Sir Henry Barwell survived until April 1924, so there seems not to have been a direct political reason. I suspect that Commodore AG Rymill, a forceful individual in his first year in office, may have urged his fellow power brokers in the Squadron to seize the opportunity at Outer Harbor before somebody else did. If so, no documentary confirmation has yet been found.

A newspaper report of the new “boat harbour” read,

This is situated at the northern end of the [Outer] Harbour, and close inshore. It is well protected from all weather conditions, and should prove an ideal place for the club’s new quarters. It is proposed in the near future to build a shed on the shore opposite the mooring space, with lockers, petrol store, motor shelter and other facilities. A lease has been secured from the Harbors Board on reasonable terms, and the committee feel that removal from Port Adelaide is a step in the right direction.

A claim for compensation totalling £3,175 for the confiscated property was submitted to the Minister of Marine. The overdraft with the National Bank was increased to provide funds for financing what was described as the Outer Harbor scheme.