Consolidation and Development at Outer Harbor

Under Commodore Alan Smith, in 1968 the polarising decision was taken to close the city clubrooms and concentrate all activities at Outer Harbor, including transfer of the liquor licence. What had been the ladies toilets and showers upstairs became the nucleus of a kitchen and bar. The old partitions were swept away to create an open dining room area. The Tom Hardy Library from Grenfell Street was relocated on the western side of the building, which has posed problems resulting from heat and light on some of the old books and colour photographs. A handsome trophy cabinet was obtained. Burgees from yacht clubs in other states and countries were framed and placed around the room.

A new entrance foyer and an internal staircase were constructed.

The result was creation of a fine area, to which Members can bring guests with pleasure and pride.

What could be called the infrastructure has required repeated refurbishment and replacement, which has been costly, without there necessarily being much to show for it. 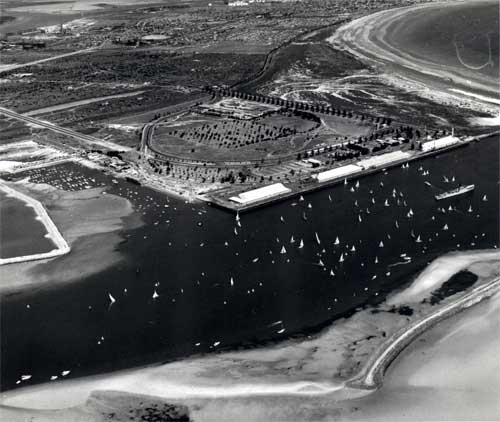 By the Centenary Regatta of 1969–70 work had begun on reclaiming the area north of the Squadron, which became the Container Wharf and its related services. Small vessels can be seen on the public moorings west of the premises. In this view, taken at low water, the potential area available from dredging can be readily seen. The western boundary of the lease was extended to its definitive location in 1989.

As long ago as about 1966 and led by some generous and gregarious Members, an enclosed area was built on the ground floor on the western side, to be used for evening barbecues. This was called Walker’s Wurley after Jock Walker, a generous and popular Member. Subsequently it was adapted to comprise a regatta office and is a venue for small meetings. Nearby, in 1994 a “gazebo” barbecue was constructed. Excellent shaded barbecues were established north and east of the traverse area and the eastern dinghy shed.

The caretaker’s cottage was demolished and a demountable building for this purpose was placed at the western boundary. This allowed a sail drying rack to be placed between the Clubhouse and the traverse area, which was later relocated east of the slips. A temporary Juniors’ clubroom was located south of this, to be relocated at the south-east corner of the premises and used for other purposes when Junior activities temporarily lapsed in about 1975.

In 1992 a staging known as the Quarterdeck was erected to complement the extension of floating pontoons along the whole of the south bank, apart from the gaps required for the two slips.

Enthusiastic Members established a new (and much better) Junior Clubroom, on the southern side of the property near the western boundary and then relocated it to the north bank.

Ever since 1924 the open space on the ground floor of the Clubhouse was used to store dinghies and for large lockers for boat owners. Similar lockers were placed in both the western and eastern dinghy sheds. This area had to be cleared and reinstalled by working bees every Opening Day. Envious eyes regarded the space as having other potential uses, and some was taken on the northern side to construct Jimmy’s Bar. This complements the Quarterdeck and is a popular venue for informal and convivial gatherings, especially after races.

From the early days at Outer Harbor yachts were moored fore and aft in parallel rows facing north-south. In response to the major threat, a storm from the north-west, they were soon changed to lie east-west. They are loosely called trots moorings, although not strictly in conformity with the classical situation at Cowes, home of the Royal Yacht Squadron. Moorings were maintained by Members, sometimes quite inadequately. Access was by dinghy or (over the last twenty years) by Squadron tender at weekends. Vessels were brought to the solitary pontoon or the adjacent hydroplane wharf to load stores, obtain fuel and water and (in defiance of by-laws) as an informal marina.

As the Squadron and its fleet expanded, pontoon facilities must be extended, which was achieved along the southern bank. With increasing demand for marina facilities, these were installed in two stages and in 2001 with a third agreed in principle. 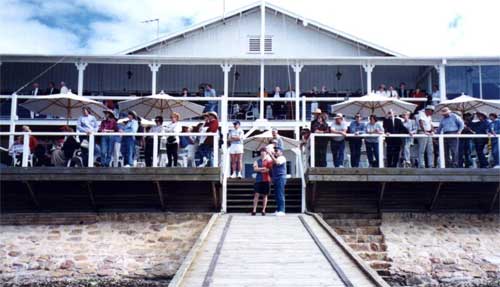 They are entered from the north bank, where an ablution block was built, incorporating services for the government departments which lease facilities, including mooring space, from the Squadron. Car parking required paving nearby, which expanded the area potentially available for dry-standing of yachts hauled out when not in the water. This development has had the undesirable effect that many people drive to and fro without entering the Clubhouse on the south bank. The Squadron’s social life and income have suffered accordingly.

In about 1968 the character of the Squadron was forever drastically altered. The Harbors Board began a program of land reclamation extending from immediately north of the Squadron pool. For several years we endured caustic dust blowing over vessels and people whenever there was a strong north wind, until at last the project was completed.

Immediately to the north of the Squadron pool Port Adelaide’s container berth was established, with three traverse container cranes operated on a 24-hour basis according to need. A sealed road against the eastern boundary brought traffic closer than it had ever been. Adjacent to it is a spur standard gauge railway line. Nearby on the western side of the premises vast car parks have been established for import and export of motor vehicles.

The tranquil peace of the past has been permanently lost. 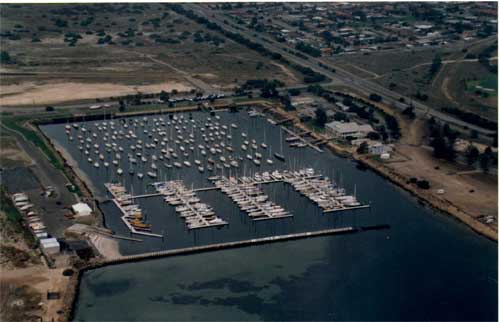 By 1991 the Squadron’s fixed and floating breakwater provided excellent shelter from NW gales. At the NW corner are sheds for government use, the Junior Clubroom and a launching ramp, together with an amenities block. The marina was fully occupied. A new entrance had not yet been constructed at the southern boundary. The Trailer Boat Club and Sea Scout training building remained immediately west of our Clubhouse. Government tenders and pilot craft lay for many years to piles on the south bank of the entrance channel, but they have been relocated into pens near our north bank, adjacent to the loading ramp.

Meanwhile the local area changed equally dramatically, although more aesthetically. A new boat harbour was constructed at North Haven, which accommodates on freehold land and water of the Cruising Yacht Club of South Australia, together with public moorings and commercial maintenance facilities. Extensive land division and housing development have replaced the original sandhills. Lady Gowrie Drive and other roads have been considerably upgraded to take heavy traffic. 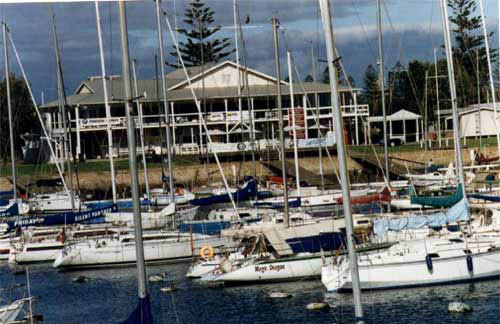 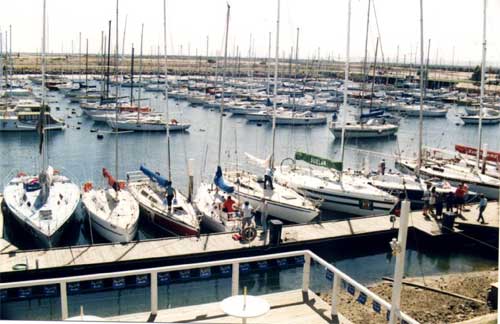