In contemplating enhancing facilities at Outer Harbor the Squadron faced formidable problems. The most important constraint was the matter of the lease. This was on a monthly basis, with no certainty that if it were to be terminated compensation would be paid for improvements. Without a secure lease, the Squadron could not borrow from a financial institution, and capital works must be financed entirely from the resources of current Members.

One great advantage was that the Squadron enjoyed a virtual monopoly of secure moorings under the eye of a resident caretaker to serve the whole of metropolitan Adelaide. The Port Adelaide Sailing Club had the disadvantage of congested water and premises ashore. Security was a problem. The Birkenhead Bridge (completed in 1940) must be opened every time yachts went to and fro. There were public moorings available in the Port River and west of the Squadron lease at Outer Harbor, but boat owners faced perpetual problems of theft and vandalism. The Small Boat Club and the Cruising Yacht Club of South Australia did not exist. The small pool at Glenelg entered through the Patawalonga lock was constructed in 1960. It accommodated no more than a handful of shoal-draft craft. There was no public access to Torrens Island, where the power station was yet to be built. The outcome was great pressure on the moorings in the Squadron pool, with at times significant waiting lists.

Resources at Outer Harbor must be expanded and enhanced. The problems were how to do it and how to pay for it. The only means were funds and effort provided by Members. There was no contribution from government sources. It was at that time not possible to borrow from a financial institution such as a bank, when at a month’s notice the premises could be closed, forcing the yachts to go elsewhere, with nothing comparable available near Adelaide.

Fortunately there was an imaginative Commodore (Dr Geoffrey Verco) with a determined General Committee and a core of strongly supportive Members. In the winter of 1959 severe storms caused a lot of damage to installations at Outer Harbor, together with erosion of the waterfront. Urgent action was required.

Congenial relations with the Harbors Board allowed the Squadron to acquire a considerable area to the east and north and — most important of all — an extended lease for twenty years. In a series of memorable working bees the perimeter fences were progressively extended to the east and north. Using a borrowed sand pump the pool was deepened and the spoil was used to good effect to build a bank to hold at bay the potential swamp in the north-east corner. A stone retaining wall was built on the eastern bank and progressively extended along the south bank.

By 1961 the pool was completely saturated, with a waiting list for moorings. Those in the front row regularly went aground at low water. The Eastern Dinghy shed and its pontoon eased congestion for lockers and dinghies in the Clubhouse. Two of the old barge hulls can be seen. The eastern stone-walling and relocation of the boundary fence came a few years later. The roof of the old car shelters can be seen at the southern boundary behind the Clubhouse. Entrance was at the SW corner. West of the pool (out of the picture) nondescript small craft lay on public moorings. Some were waiting for a vacancy to enter the pool

During 1961–62 a virtually compulsory loan scheme was established. Both boat-owners and other Members provided interest-free loans over a five-year period, to be repayable in the distant future. Most were subsequently forgiven.

With these funds, major development began. Dredging was professionally undertaken to accommodate an increasing number of larger vessels. A new and much larger slip was installed, followed by a second slip. A traverse system allowed yachts to be hauled out for extended periods.

To overcome peak pressures the traverse area was greatly expanded and sealed with concrete. This was excessively ambitious, and it has never been fully utilised.

At this stage the decrepit old Clubhouse remained virtually unchanged from how it was forty years previously. There were still no facilities beyond the electric kettle and a few tables and chairs. At least the lawn area was extended and tree planting enhanced the barrenness of the past.

In 1964 a “comfort station” was established upstairs in the Outer Harbor Clubhouse. Here alcohol was unlawfully made available, although there was a fright when some prominent citizens were convicted of a similar activity at a golf course. This had the good effect of accelerating long overdue amendments to the Licensing Act. For the first time some social amenities began to appear at Outer Harbor for those who used the premises and otherwise had only what they had on the yachts or brought with them.

Ablution and toilet facilities bordered on the squalid. Over the next year or so toilets and showers were removed from upstairs and a new block was constructed, which remains in use. The new facilities for women were at first quite inadequate for big events (and still are) but at least they were improved.

A significant advance was construction of an office in the eastern extension of the Clubhouse for the Secretary-Manager, who for the first time regularly came to Outer Harbor at weekends. One of his predecessors was seen there no more than a couple of times a year.

A Junior Clubroom was established near the caretaker’s cottage, only to be relocated and used for other purposes when additional storage area was required. Two sheds were erected near the southern boundary for shipwrights and a third for the Squadron’s own purposes.

The final acquisition of land to the east, coupled with renewed dredging, allowed the Squadron to level and plant an area of lawn near the eastern dinghy shed, where extra toilets were installed. The traverse area was paved and power installations were brought up to commercial standards. A generous member donated security lighting. A better perimeter fence was erected to enhance security.

Commodore Alan Smith closely involved himself in these important developments, and continued to devote his time and energy to successive projects until shortly before his death in 1998. 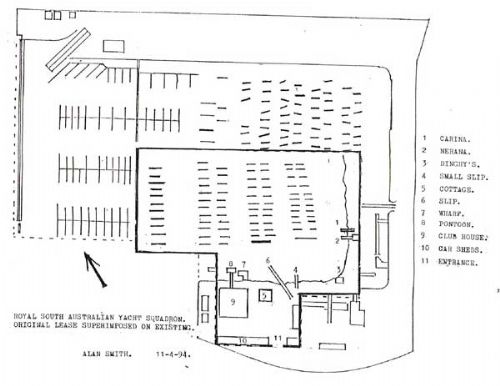 Alan Smith’s diagram recorded all the salient changes from 1923 to 1994.