Protection for moored vessels was inadequate. The sand Section Bank on the right bank of the Port River went under at high water in strong north-west gales. (It was raised with rocks many years later, when the container berth was established.)

Regularly moored craft broke free and damaged each other. On at least one occasion a substantial motor boat was stove in and sunk. In an initial attempt to improve this, the Squadron deposited some old barges across its north-western and northern perimeters, but they eventually broke up and became useless for their intended purpose.

At low water on a calm day in about 1927–8, there was a misleading sense of protection from the combination of old barges and the undredged north bank. The yachts were moored N–S, until damage caused by gales resulted in relocation to E–W, to match those in the front row. (Birnie album)

Amenities were minimal. Upstairs were a couple of toilets and showers each for gentlemen and ladies. An area behind a partition with some clothes hooks was designated ‘For Senior Members Only’. Other than a solitary power point with an electric kettle, there were no catering facilities. Members had to bring their own, and the Squadron hired things for big occasions such as Opening Day.

There was a single slip beside the residence of the caretaker, and a shed erected by Professor Mark Mitchell for his vessels. This was destroyed by a storm in 1938. At the southern edge of the property were roofed enclosures to protect motor cars from rain and blowing sand.

The social life of the Squadron was divided. Locals used the Port Adelaide and Semaphore Clubhouses until they were sold. From 1935 to 1968 Members (who must be British gentlemen) with access to Adelaide used the licensed premises in a basement in Grenfell Street, mainly as a place for city businessmen for lunches. Women were admitted on one night a year. As a result, there were many social Members who had limited if any interest in what went on at Outer Harbor, other than special events once or twice a year. Developments there depended on boat owners, whose prime commitment was necessarily to their own craft. At least one Secretary rarely went there.

The tin shed in the swamp stagnated until after the Second World War. 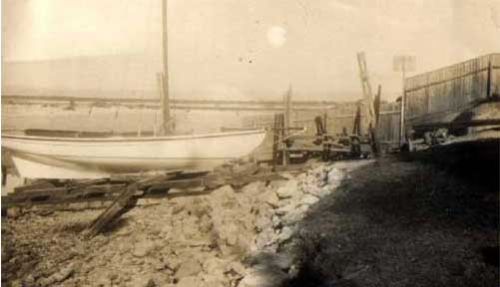 Ardale (briefly one of the Wylos) on the RSAYS slip, 1927 (Birnie album) 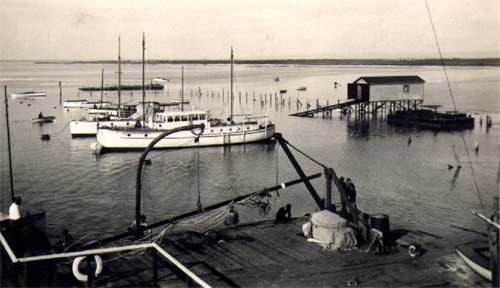 Avocet and Grelka moored in front of Mitchell’s shed, showing the original eastern boundary fence, with the Hydroplane Wharf in the foreground.

After the fall of Singapore in February 1942, there was genuine fear throughout Australia of Japanese invasion. Although the threat in South Australian waters was minimal, precautions were taken.

Barbed wire barricades were erected on metropolitan beaches. The Birkenhead and Jervois bridges were drilled for demolition charges. Place names were removed from post offices, but few other buildings, public or private. Machine gun emplacements were constructed to defend such targets as the Glenelg tramline at Morphettville and the Sturt Creek amid the market gardens of Warradale. In Adelaide important buildings like the General Post Office were sandbagged. Trenches were dug everywhere for shelter, and large concrete pipes were placed along North Terrace for this purpose. The Governor of the day was photographed in one to inspire the citizens with confidence. Men returning from combat remarked that anybody in them would most likely be killed by blast. Each night searchlights roamed the skies over Adelaide, although the only anti-aircraft guns in South Australia protected the new shipyards at Whyalla — where for many months there were no search lights! 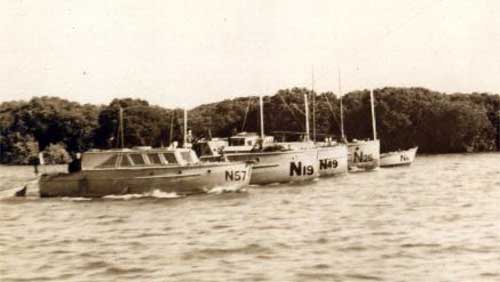 The Royal Australian Navy compulsorily acquired some Squadron vessels, which served as far afield as the Philippines. Others, together with Members, were employed locally in the work of the Naval Auxiliary Patrol. The remaining vessels in the fleet were relocated from the pool at Outer Harbor to Number Three Dock at Port Adelaide. Fuel rationing compounded shortage of crew in suspending most Squadron activities at this time, both formal races and informal cruising. Vessels entering and leaving the Port River were required to report to the Pilot Tower coming and going. It was said that one neglecting to do so received a bullet hole through the mainsail from an unduly conscientious sentry.

The premises at Outer Harbor retained their storage functions for the small number of vessels operating the NAP. Sea Scouts had some training there, in pretty spartan conditions.

At the end of the War in 1945, it was apparent that the pool had silted up considerably since it was originally dredged in 1923 and extended in 1928. The yachts were located in the North Arm while the Squadron undertook to have it deepened and enlarged. 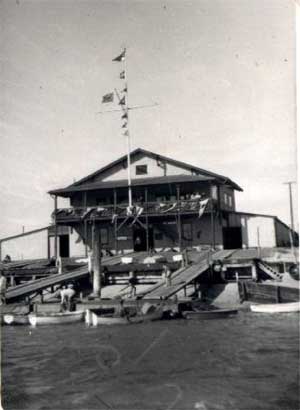 In 1954 the only significant change since 1926 was construction of the western dinghy shed and a second walkway to the pontoon. The eastern shed was originally built for hydroplanes. (HW Rymill album)

Most colourful yachting event of the season, so far, was the opening of Royal South Australian Yacht Squadron’s new mooring basin at Outer Harbor on January 21. Nearly 100 power and sailing craft took part in the demonstration which accompanied the ceremony.

Lady Norrie, who with His Excellency the Governor (Sir Willoughby Norrie) was aboard the flagship Sir Wallace Bruce, cut the ribbon across the entrance to the pool. State Government and Harbors Board representatives were among the official party.

Commodore HJ Kemp declared the pool open from in front of the flag bedecked clubhouse and later took the salute aboard the flagship during the sail past. Rear Commodore HW Rymill led power boats in Sea Hawk and Vice-Commodore CP Haselgrove, aboard Neptune Island race-winner Nerida, was in charge of sailing craft.

The basin was enlarged during the winter to accommodate about 130 boats — twice as many as last season.

In the early postwar years notable changes took place in the activities undertaken by Members. The speedboats known as hydroplanes were advancing to extinction (so far as the Squadron was concerned) and sailing craft supplanted motor boats as the dominant group. Racing expanded considerably, both inshore on summer weekends and in an increasing number of long distance offshore races. Larger vessels arrived, so that slipping facilities were increasingly inadequate.

Equally importantly, in Squadron politics the pressure steadily mounted to concentrate on the actual pastime of yachting rather than to have much of the activities (and resources) dominated by Members who used the City Clubrooms as a business men’s luncheon club.