The basic iron shed, the core of which has survived to the time of writing, was constructed by EH McMichael, but no record has been found of what it cost. A loose piece of paper in a draft of the 1969 centenary history implies that the Harbors Board may have paid for it, but the documents in State Records have not yet been consulted.

A caretaker was appointed at a salary of £4 per week, plus free use of a new small weatherboard cottage and the opportunity to earn small sums doing work for Members.

Mooring fees were initially set at £1 pa for vessels up to 20 ft, with an additional £1 pa for each additional 10 ft or part thereof. Lockers would be 10/- pa; dinghy space 10/- pa; and magazine space [?] 5/- pa. Benzine would be stored in drums for purchase by Members. Commodore AG Rymill bought from the sale of the Grand Central Hotel some furniture which has survived in the Squadron to the present day. It is not clear whether this was by donation or use of Squadron funds.

The new premises were officially opened by Commodore AG Rymill on 24 November 1924, that being the day of the Opening Demonstration for the season.

The Squadron was heavily dependent on Members for establishing itself at Outer Harbor.

On 16 November 1994 Mr Denis Winterbottom, who was then 84 years of age, recalled helping his father in the working bee to construct the first rough track from the vicinity of the Outer Harbor Railway Station to the south-west corner of the new premises. This was some time in the summer of 1924–25, when he was a schoolboy at Saint Peter’s College. He also recalled horses and scoops excavating sand at the Squadron.

Three tons of loam and 1½ hundredweight of sulphate of ammonia were purchased to establish a lawn, with the work done by Members. Presumably the caretaker was left to push the new lawnmower, which would not have had an engine. In the same way the Squadron bought the pipes and fittings to connect water and connected electric light. In a foretaste of marina living, Commodore AG Rymill extended electricity to his yacht Avocet.

At this time motor boats outnumbered sailing craft, with much interest in the racing craft called hydroplanes. Special facilities were installed for them.

The new wharf just inshore from the floating pontoon for the handling of small hydroplanes has just been completed. This is directly in front of the new wing to the shed, which will be retained solely for hydros, and the main shed floor reserved solely for sailing and ordinary dinghies. (25 February 1926)

Spectators crowded on to anchored vessels to watch the Griffith Cup of 1923, won by AG & ES Rymill in Tortoise II.

An estimated 30,000 people jammed every vantage point to watch the Rymills’ somewhat anticlimactic victory. Commodore Rymill arranged that those on the wharf paid 2/- each for entry. That would have been a welcome boost to Squadron funds.

A new caretaker, Mr AO Shaw, was appointed at a salary of £4.5.0 per week “with cottage and lighting”. He would have been relieved when a fence was constructed round it. In March 1926 he was granted a bonus of twelve guineas (£12.12.0) “in recognition of the splendid manner in which he has carried out his duties during the last six months”.

Unspecified improvements at Outer Harbor were undertaken in late 1925 at a cost of £476.12.2. In 1926 the hydroplane wharf was constructed, to which the Rymill brothers and other Members with racing motor boats contributed significantly. The structure survived until the southern foreshore development of the 1980s. 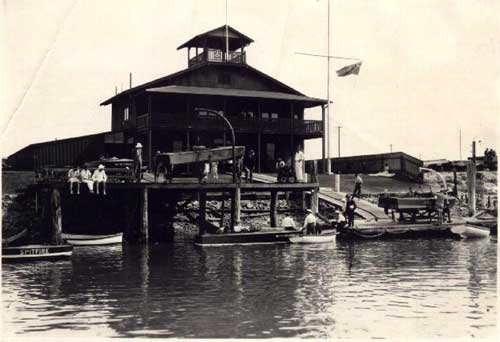 The Hydroplane Wharf, about 1926 (Darian Smith) 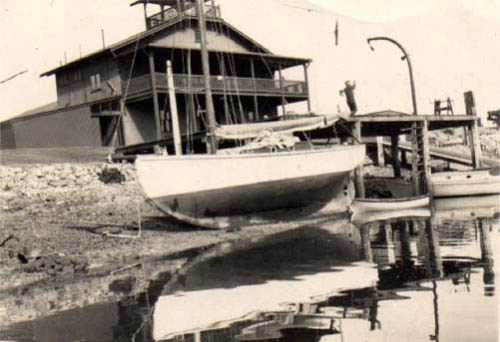 To save the cost of slipping, many owners careened their boats for maintenance. This was Mannara, built by Searles of Birkenhead for Mr CF Haselgrove in 1924. (Don Haselgrove)

The Port Adelaide premises in the old bank were offered for sale at £5,500 and by a narrow majority the General Committee decided to dispose of those at Semaphore. This was a polarising issue, which eventually led to significant loss of Members to a reconstituted Semaphore Club. It didn’t survive after the Second World War.

The Vacuum Oil Company installed a bowser and pump in order to supply petrol to Members. First grade benzine cost 2/3 per gallon and second grade 2/1. Antifouling paint was sold by the Squadron to Members at £1.10.0 a gallon (red), 15/6 for ½ gallon (red) and 17/6 for ½ gallon (green). The pontoon sank and had to be replaced.

In 1928 the dredged area was extended. The original basin involved removal of 50,000 cubic yards of spoil, at a cost (in 1923) of ninepence to a shilling per cubic yard. Depth ranged from 4 ft 7 in to 8 ft 2 in. Unfortunately, the cost of this was not recorded, but it was born entirely by the Squadron.

Outer Harbor was established to provide sheltered wharfage for shipping in 1908. It was a dreary place. The only dwellings were two or three cottages for the families of the men employed in pilotage and the like. A new arrival to South Australia confronted bleak iron sheds on the wharves with an adjacent railway station. There was no shop or other protection from the elements. A narrow sealed road passed through deserted sandhills to the village of Largs and places beyond. It was often partially covered by drifting sand. The avenue of Norfolk Island pines was planted in 1936 for the State Centenary.

East of the Squadron premises was a tidal creek, and to the north were mud flats at low water and an expanse of sea to Torrens Island and Saint Kilda when the tide rose. Access to the north and east was possible only at low water. Mosquitoes were a menace.

There was nothing to attract a visitor other than the inducement of sailing, fishing or the transient excitement of racing by either motor boats or yachts. One significant advantage was readier access to the open waters of Saint Vincent Gulf rather than negotiating the loop of the Port River with its shifting sandbanks and quite heavy commercial traffic.